Call us now for the best price in town!

One of the obstacles facing many engineers working small live sound gigs is having to drag the P.A. from venue to venue and constantly changing the setup. The Yamaha EMX5016CF portable mixer is designed to alleviate P.A. woes for portable and installed applications where versatility and simplicity is paramount. Priced at $1,249 and combining a 16-channel mixer with a stereo power amp, built-in effects, digital EQ and a feedback eliminator, the EMX5016 is a workhorse that provides intuitive operation.

FEATURES AND FX
The EMX5016CF has eight mono input channels (XLR mic or TRS line), each with 3-band EQ, insert, two aux sends, two effects sends to internal DSPs and 48-volt phantom power. Four stereo channels accept mono XLR mic or stereo ¼-inch or RCA inputs. The effects section's two DSP engines are based on Yamaha's ubiquitous SPX algorithms. The master output bus is available on ¼-inch stereo outs, RCA "record outs" and two stereo sub outs, in addition to the speaker outs. All channels and the two effects returns route PFL to a headphone jack with level control. The eight mono channels include a one-knob compressor, which simultaneously raises the compression ratio and adjusts the makeup gain. In some applications (e.g., snare drum), I heard too much makeup gain, but I found the compressor to be effective for smoothing bass and vocals. Both stereo effects processors have 16 presets, including reverb, delay, tremolo, chorus, phaser and other effects. These are returned on "mini-channels" with PFL, on/off, and aux 1 and aux 2 send controls, so routing effects into the monitors was an easy task. A knob for each effect modifies a single parameter, so adjustment is limited. Some of my faves were early reflections on snare and chorus on clean electric guitar.

TAKE ME TO YOUR MASTER
Located near the master section is a 9-band digital EQ. Each band has an LED bar graph and "±" buttons for adjusting gain. Memory slots allow quick recall of three factory presets ("vocal/dance/speech") and three user defined EQ curves. The EQ looked intimidating, yet operation was intuitive: I could easily set my own presets on the fly without consulting the manual. Working with the EQ section is a feedback suppressor and Frequency Response Correction (FRC) system. The feedback suppressor's Auto mode worked well, though I could sometimes hear the filter shifting back and forth between ringing frequencies. FRC is an auto-analysis program that analyzes noise (or music), calculates a suggested EQ curve for correction and displays the curve on the EQ graph. This function worked fine, though I typically tweaked the result by ear.

IN THE TRENCHES
Using the mixer in the field revealed a lot of strengths and some weaknesses. On the plus side, the power amps are configurable in several ways. Speaker level output is delivered via parallel Speakon and ¼-inch outputs, typically used for the L/R mains. A front panel switch lets you derive the two power amps from L/R, aux 1/mono or aux 1/aux 2 buses. A three-way switch sets maximum speaker output to 75/200/500 watts per channel. On gigs with a pianist and a Neapolitan tenor, I could customize the EMX-5016CF for the venue. At a small restaurant (where no monitors are needed), I set the speaker outs to L/R at 75W. A larger room required a monitor, so the EMX5016CF was set to output mono/aux 1. On an upcoming gig in a dance hall where I'll need two monitors, I'll simply set the unit's outs for aux 1/ aux 2 and use the stereo output to drive an external power amp for the mains-a great example of the unit's versatility.

I do have a few criticisms about the mixer. Patching a signal into either the left or right jack of a stereo channel will deliver that signal to only the respective bus; many mixers automatically switch a channel to mono when you patch into a single jack of a stereo channel. However, patching a mic into a stereo channel delivers signal to the L and R buses. There is no indication of PFL (or AFL) other than the position of the button, making it difficult to see exactly which channels are being cued. Same thing for the compressor, though you'll be able to hear it. Occasionally, I'd hear a pop when turning phantom power on, even if no mics were plugged into any of the channels.

POWER AND MORE
In addition to excellent sound quality and ample headroom, the EMX5016CF is easy to use. Even with all of its features, you'll hardly need the manual due to the board's intelligent design. One example of the EMX5016CF's clever functionality is a Standby switch that mutes channels 1 through 8 while leaving the stereo channels unmuted to provide background music between sets. And because each effect has a footswitchbypass jack, it's easy to turn off effects inbetween songs. I loved the output power range switch: Finally, you won't have to compromise gain structure when using a powered mixer. 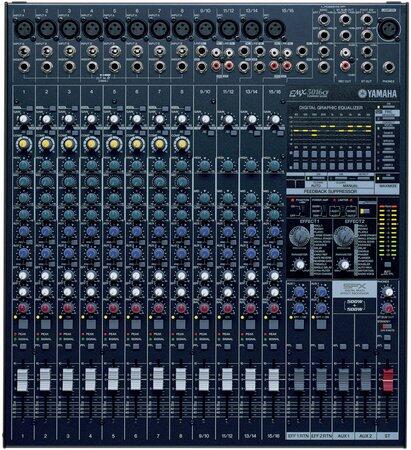